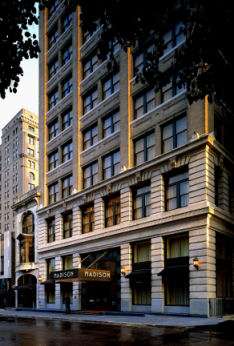 Boutique hotel is a term used initially in North America and the United Kingdom to describe small hotels which have typically between 10 and 100 rooms in unique settings with upscale accommodations.

Boutique hotels began appearing in the 1980s in major cities like London, New York, and San Francisco. The term was coined by Steve Rubell in 1984 when he compared the Morgans Hotel, the first hotel he and Ian Schrager owned, to a boutique.

Many boutique hotels are furnished in a themed, stylish and/or aspirational manner. The popularity of the boutique concept has prompted some multi-national hotel companies to try and capture a market share. In the United States, New York City remains an important centre for boutique hotels clustered about Manhattan. Some members of the hospitality industry are following the general "no-frill chic" consumer trend, with affordable or budget boutique hotels being created all around the world. Boutique hotels are found in London, New York City, Miami, and Los Angeles. They are also found in resort destinations with exotic amenities such as electronics, spas, yoga and/or painting classes. 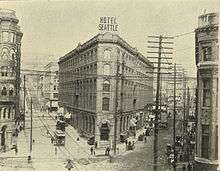 The Seattle Hotel (also known as Hotel Seattle) was the third of three hotels located in Pioneer Square in a triangular block bound by James Street to the north, Yesler Way to the south, and 2nd Avenue to the east, and just steps away from the Pioneer Building. It was built in 1890 from the ashes of the Great Seattle Fire and served as a hotel until early in the 20th Century. By the time neighboring Smith Tower was completed in 1914, the Seattle Hotel had become an office building.

Before the Seattle Hotel rose in 1890, there was the Occidental Hotel. The first Occidental, which opened in 1861, was a wooden building. Twenty years later, on September 26, 1881, it held a memorial service for President James Garfield, who had died five days earlier from injuries sustained when he was shot in July.

In 1883, the wooden structure was torn down and John Collins built a bigger, grander one in the same location. It lasted just four years, before burning down in the Great Seattle Fire on June 6, 1889. The second Occidental Hotel, like the Seattle Hotel, was also triangular-shaped. 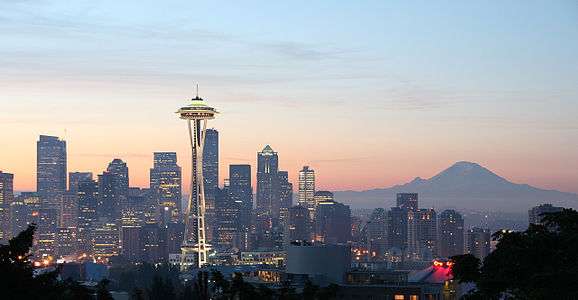 i/siˈætəl/) is a West Coast seaport city and the seat of King County. With an estimated 662,400 residents as of 2015, Seattle is the largest city in both the state of Washington and the Pacific Northwest region of North America. In July 2013 it was the fastest-growing major city in the United States, and remained in the top five in May 2015 with an annual growth rate of 2.1%. The Seattle metropolitan area of around 3.6 million inhabitants is the 15th largest metropolitan area in the United States. The city is situated on an isthmus between Puget Sound (an inlet of the Pacific Ocean) and Lake Washington, about 100 miles (160 km) south of the Canada–United States border. A major gateway for trade with Asia, Seattle is the third largest port in North America in terms of container handling as of 2015.

The Seattle area was previously inhabited by Native Americans for at least 4,000 years before the first permanent European settlers.Arthur A. Denny and his group of travelers, subsequently known as the Denny Party, arrived from Illinois via Portland, Oregon on the schooner Exact at Alki Point on November 13, 1851. The settlement was moved to the eastern shore of Elliott Bay and named "Seattle" in 1852, after Chief Si'ahl of the local Duwamish and Suquamish tribes.

"Seattle" is a song, which was composed by Hugo Montenegro and whose lyrics were written by Jack Keller and Ernie Sheldon, which was used as the theme for the 1968-70 ABC-TV U.S. television show Here Come the Brides, which was situated in 19th-Century Seattle, Washington.

Two different versions were used as the theme for the television series, for both of which Montenegro conducted an in-studio orchestra: the first was instrumental; and the second was vocal, with its lyrics being sung by a musical team called "The New Establishment."

"Seattle" is sung by the Seattle Sounders FC's supporter groups, during matches, specifically at the kickoff of each half. 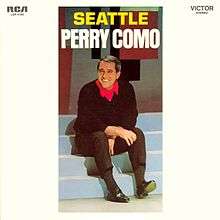